This Could be the Season Graham Racing has been Waiting For 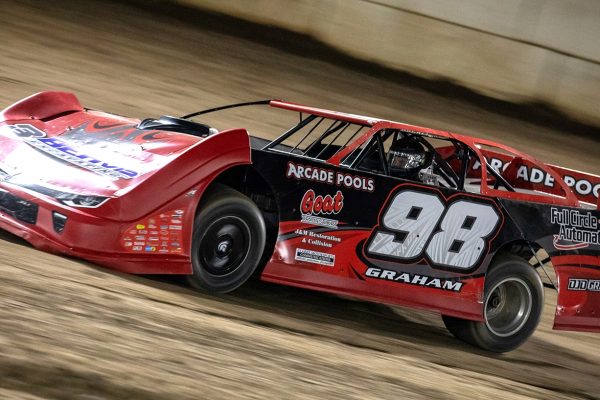 This Could be the Season Graham Racing has been Waiting For
By Jim Clarke, Clarke Motorsports Communications/First Draft Media

If there is truth in the saying ‘good things come to those who wait’, Graham
Racing is in store for a very successful 2022 season.

Things over the last 2 seasons didn’t go exactly as planned but the father
and son duo of Craig and Brandt Graham from Orono, Ontario is ready for
the next challenge in their Dirt Late Model racing plans. Their No. 98 and
No. 14 Rocket Chassis machines are being prepped for an ambitious
schedule of more than 25 events on both sides of the border that they’re
hoping will get underway Wednesday, April 13th at Delaware International
Speedway. Craig Graham says it’s a great feeling to think that the team will
actually get to some extensive travelling this year.

“This year’s schedule is very close to the one we had planned to follow in
2021 before the border closures forced us to find shows closer to home,”
admitted the driver. “Brandt and I have maintained a positive attitude and
the crew is very close to having both cars ready for the season’s first green
flag. We’re counting the days to the opening round of the year and putting
our gear through its paces.”

In addition to hitting as many of the RUSH and NLMA Late Model tour
events as possible, Graham Racing will also be part of the regular season
shows at Humberstone Speedway and chase the checkered flag at some
of the late season special events. Even with dirt track action the primary
focus for the team, the Canadian Thanksgiving Weekend will see a return
to the familiar asphalt layout at Peterborough Speedway where Brandt
Graham logged a 6 th place finish in his 2021 Autumn Colours Classic Late
Model debut.

“Peterborough Speedway is less than an hour from home so it’ll be great to
get back there again for Autumn Colours,” Brandt Graham said. “I had
some good runs there in our Mini Stock and strong performances with the
Sportsman Series ride. Depending on what’s happening with other tracks in
the area, it may be our ‘go to’ destination if another show is rained-out.”

Craig Graham puts his No. 98 machine through its paces during a 2021 stop at Southern Ontario
Motor Speedway. Graham Racing has put together an active 2022 schedule for the father and son
team from Orono, Ontario.