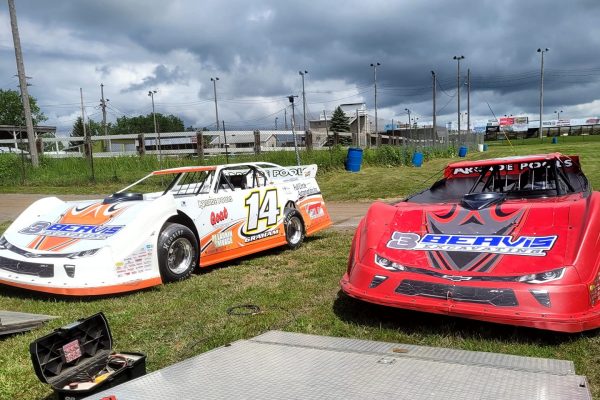 In many ways, it seems like the 2022 local racing schedule just got rolling, while the truth of the matter says things will wrap-up for another year in only a couple of months.

After having their anticipated line-up of road trip travels delayed by COVID-19 for a couple of years, the father and son duo of Craig and Brandt Graham was finally able to follow their plan of visiting some different tracks in a season of chasing racing at some different tracks on either side of the border. The drivers of the No. 98 and No. 14 Late Model machines said they enjoyed running some fresh tracks and making some new friends.

“Some teams might have still delayed their travel plans but Brandt and I were ready to hit the road and wave the Canadian flag on an international stage,” said Craig Graham. “Over the last few years, we might have made about half a dozen starts so I’d say we were more than ready to get going. When you’ve become used to racing every weekend, it was very hard to stay home.”

Craig Graham says his team – led by father in-law, grandfather and crew chief Marten Rottine – always makes sure the equipment is ready for action wherever they race. As the 2022 season winds down, Graham Racing will be covering new ground as well as some familiar turf in their search for another strong finish.

Graham Racing notebook: During a Sunday, July 10th RUSH Late Model tour stop at Eriez Speedway Craig Graham qualified for the feature event through the ‘B’ main and scored an 11th place finish in the headline dance. Brandt Graham missed the final feature race transfer position by just one spot but managed to lead every lap on the way to winning the non-qualifiers race.

Fans can catch the No. 98 and No. 14 Graham Racing dirt track Late Model teams at a pair of upcoming NLMA events – Friday, July 29th at Ohsweken Speedway and Saturday, July 30th at Humberstone, with additional dates also scheduled for August and September, including an inaugural visit to Brockville Ontario Speedway Friday, September 9th.

Be sure to keep in touch with Graham Racing through the year’s late season events by visiting www.graham98racing.com or through the team’s Facebook, Twitter and Instagram social media platforms.