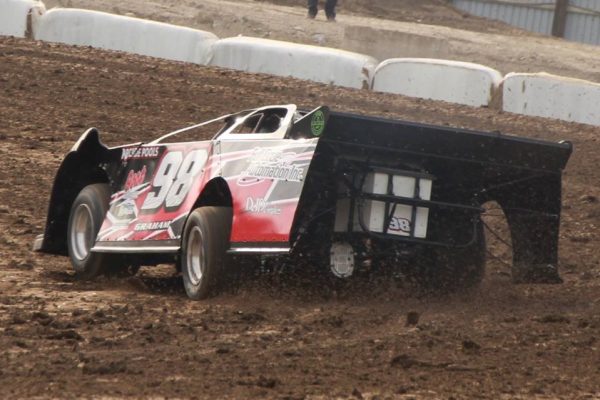 The atmospheres are completely different, but in many ways weekly racing can almost be like a trip to the casino. All the hard work, time and effort spent in the shop through the week can come down to a roll of the dice once you head onto the race track. To put things in simple, easy to understand terms, stuff happens.

Over the years, Graham Racing has earned a well-deserved reputation as being one of the best prepared teams in the sport. No matter where the father and son duo of Craig and Brandt Graham has chosen to race, their equipment is always immaculately prepared and expertly maintained. For the 2018 schedule, both drivers are competing at Brighton Speedway. Craig is running his second season in the Pro Late Model division, while Brandt is a rookie in the Canadian Modifieds. To say that their season hasn’t exactly gone as planned would be an understatement.

“Opening night of the year saw a number of firsts for our team,” Craig Graham said. “After several seasons of asphalt racing, Brandt logged his first laps on a dirt track. And for their first time in my career, I got upside-down in a racecar.”

While Graham says the car sustained some significant damage in the crash; but luckily, the safety equipment did its job. Other than his pride being a little shaken and his ego somewhat bruised, he walked away from incident unhurt. Just a week later, the team’s misadventures continued when some of the body panels on Brandt’s #14 were twisted and torn after an issue on the track. Again, the driver was uninjured.

“Accidents are just part of the sport. They’re going to happen and there really isn’t much anyone can do to change that,” Graham explained. “We’ve always put a strong emphasis on driver safety and encourage other teams in the sport to make it a priority as well. Everyone loves to win a race, but at this level, the primary goal of the sport is to have fun. I have a wife and children. I have a full-time job and my employer counts on me to be there. Having the proper equipment in the car to keep us safe may cost a little more but looking at what has happened to our teams so far this year shows that its worth every penny.”

After putting in some long hours in the shop – that also included a couple of trips to Chub Frank’s facility in Pennsylvania – Craig Graham was able to get the #98 Pro Late Model back on the track and rejoin his son Brandt – who recently scored his first dirt racing top 10 finish – at Brighton Speedway’s Fan Appreciation Night Saturday, June 9th. Craig finished 11th in the main event, while Brandt was 8th; another career best effort.

Follow the team behind the scenes and at the track by checking @Graham_Racing on Twitter and the Graham Racing team page at www.facebook.com. Look for www.graham98racing.com, an Image Factor web-site. Clarke Motorsports Communications is proud to support the 2018 season for Graham Racing.

After being forced to the sidelines following an early season rollover, Craig Graham logged an 11th place finish in the Pro Late Model feature – Saturday, June 9th – at Brighton Speedway.