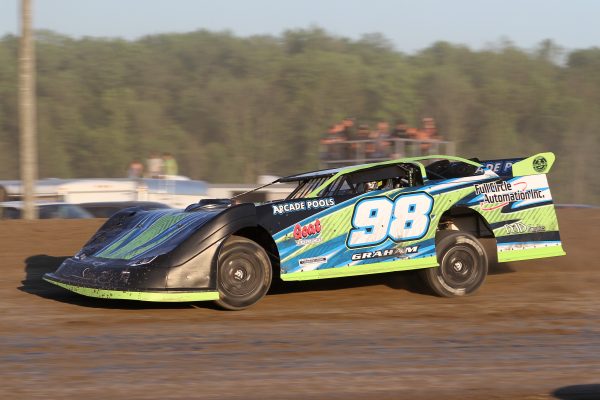 With a number of short track teams working through a rollercoaster season caused by wetter than usual springtime track conditions, the father and son pairing of Orono, Ontario’s Craig and Brandt Graham can’t wait to get to the next event at Brighton Speedway. Earlier in the year, Brandt Graham scored his first career dirt track feature win with a checkered flag in the #14 Canadian Modified, while Craig Graham has enjoyed a string of consistent top 5 and top 10 showings in his #98 Late Model. Heading into the Saturday, July 6th show at the Northumberland County raceway, they were 8th and 11th in the respective point standings.

“This team never stops working and that effort translates to the results we’ve been able to show on the racetrack,” Craig Graham explained. “Getting a couple of cars ready for the track every week makes for a busy shop, but we have the people who can get the job done.”

As reported on www.facebook.com/graham98racing, the team’s Facebook page both teams were able to come away from the most recent outing at Brighton Speedway with a top 5 finish. Brandt Graham started 7th in the Canadian Modified Triple Crown race and even though the car’s set-up went away near the end of the event, he managed to hang-on for a 3rd place showing at the checkered flag. Craig Graham started on the outside of the front row in the 30 lap Late Model ‘A’ main and managed to stay there for nearly the entire race, but an untimely caution flag with just 5 laps remaining dropped him to 5th place at the finish.

“It was a strong night for both cars in some hot and sticky conditions. I really have to thank our crew – Rick Rowe, Ted Stacey, Ian Graham and Marten Rottine – for toughing-it-out in the heat,” Craig Graham added. “We couldn’t do it without them.”

In addition to their regular Saturday night appearance on the home turf at Brighton Speedway, fans can follow Craig and Brandt Graham at a variety of events on the road. The #98 team will be part of the RUSH Late Model Series Quebec Invasion Friday, July 12th and Saturday, July 13th at Autodrome Granby and RPM Speedway. Monday, July 22nd the #14 Canadian Mod and #98 Late Model machines will both travel to Ohsweken Speedway for the opening night of the 2019 Summer Nationals, presented by Burger Barn and Bradshaw Brothers. Additional dates will be announced.

Family, friends and fans can keep up with Graham Racing by liking the team Facebook page: Graham98Racing or following it on Twitter: @Graham_Racing. On-line, look for www.graham98racing.com.

Orono, Ontario’s Craig Graham (#98) is looking forward to a busy month of action on the road and on the hometown turf at Brighton Speedway.