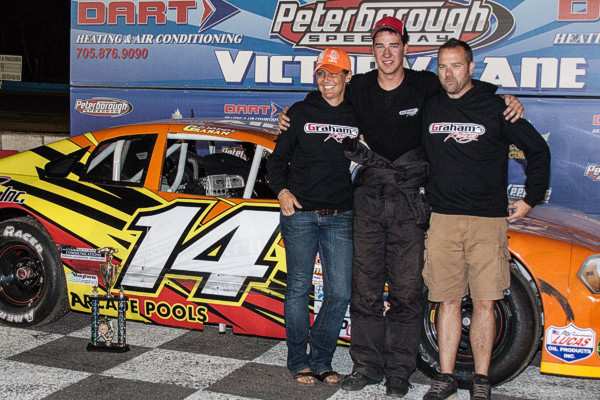 The sport’s most talented names will tell you that consistency is the key to a championship winning season. Coming into the year’s 5th date on the Lucas Oil Sportsman Cup Series Tour – Saturday, August 6th at Peterborough Speedway – Brandt Graham had recorded back-to-back main event wins and also laid-claim to a $1000 bonus that added the moniker ‘Boss of the Beach’ to his list of accomplishments.

The stick and ball sports often talk about a home field advantage and the same logic applies to motorsports. While 18 year-old Brandt Graham may be the one behind the wheel, his father Craig has logged multiple seasons, with numerous track championships at the venue known as Canada’s Toughest 3rd of a Mile Paved Oval. That experience proved beneficial when the team set-up the car for their latest battle.

“Both my Dad and my grandfather asked me about changes I felt we needed after the practice session,” said the driver. “I told them that I felt the car was perfect just the way it was. There was plenty of speed and it handled well. From there, I thought we had the package we’d need to be in a position to contend for the win.”

During qualifying, the #14 machine set the day’s fastest time with a lap of 14.67 seconds, earning the pole position. Prior to the green flag, the top qualifiers went through the customary Fast 5 Fan Draw and while a couple of positions may have changed, in the random chance selection by a fan Graham maintained his original starting spot on the inside of the front row.

While he has yet to complete his second full season on the tour, when the green flag waves Brandt Graham races with the composure and experience of a veteran with more than three times his age. During the Peterborough Speedway stop, he showed a high level of confidence and took care of his equipment throughout the entire race distance. Lap after lap, Graham logged consistent times as he led all 100 laps to claim his 3rd straight series win.

“We have a great team and everyone is working together for the same goal,” said the driver, while relaxing after the event. “I feel very fortunate to have this opportunity and the chance to meet and work with so many positive, enthusiastic people. Its been a great season so far and I can’t wait to get to the next event on the calendar.”