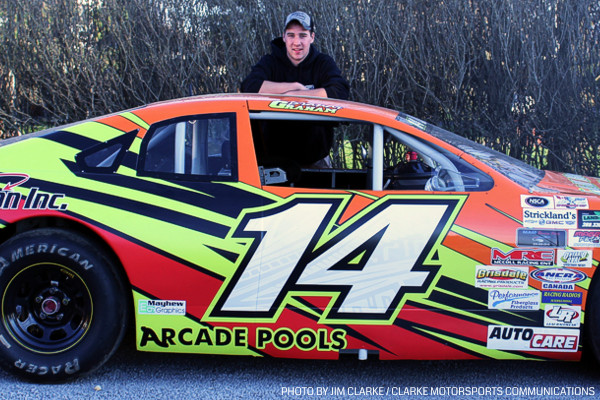 His racing resume includes time at the controls of a Go Kart and a Mini Stock, but Brandt Graham’s 2015 performance with the Lucas Oil Sportsman Cup Series set standards that speak for themselves. The 17 year-old from Orono, Ontario became the youngest main event winner in the tour’s history, with a season ending victory at Full Throttle Motor Speedway while also logging a 4th place finish in the final point standings and claiming the rookie of the year award.

Under the direction of crew chief Marten Rottine, the team spent the winter months reconfiguring their #14 McColl Racing Enterprises chassis with an updated Chevrolet Impala SS body kit. Looking to maintain the momentum gained during an impressive freshman season, father and car owner Craig Graham says preparation behind the scenes is the key to a strong performance on the track.

“We’ve always been very thorough when it comes to doing our homework,” said Graham. “Our equipment never leaves the shop unless we’re ready for anything that can happen once we roll through the pit gates at the speedway. Its about more than having a car that looks good on the outside. The schedule has only one race that’s within an hour of our home base, so we have to make sure we’re thinking about the big picture.”

Even though the new season doesn’t get rolling for about another month, Brandt Graham – who works part-time at Orono Country Café and with his father at Clarington Hyundai – was able to put his machine through its paces during an open test session – Saturday, April 16th – at Flamboro Speedway. While there were a number of racing divisions taking advantage of the same opportunity, the driver and his crew felt the chance to practice at the track where this year’s tour opens was too good to pass up.

“We were able to get a baseline set-up that’ll hopefully translate to a strong run when we’re back for the race,” said Brandt, who will study in the Trades Fundamentals program at Durham College this fall. “There are 3 Flamboro stops on this year’s schedule, so any advantage we can take into a race situation will help the team a great deal.”

Follow the team at every race by checking @Graham_Racing on Twitter and Graham 98 Racing atwww.facebook.com. Look for www.graham98racing.com – an Image Factor web-site – coming soon.