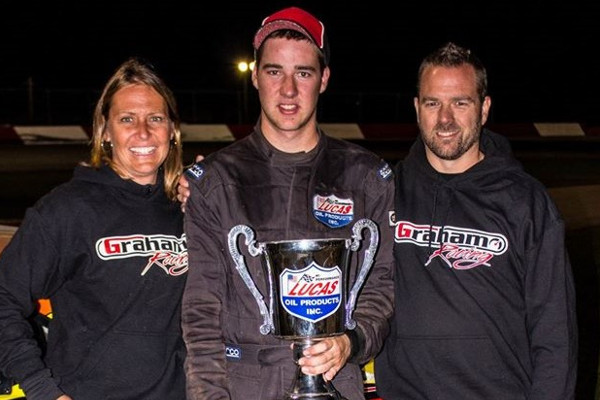 A time-honoured adage tells us “good things come to those who wait” and when Mother Nature dictated that the 2016 Lucas Oil Sportsman Cup Series finale would be delayed by a week, Brandt Graham took it all in stride. The young, second-generation racer from Orono, Ontario was the odds-on favourite to claim this year’s point championship and if a far from desirable weather forecast for the originally scheduled run meant a week’s delay, that’s how it would have to be.

“It was just one of those things that sometimes happen and there wasn’t anything we could do about it,” said Brandt Graham. “We were already well on our way to the track when we got word that because of the expected rain and possible thunderstorms, they’d made the decision to throw in the towel for the day. We got off the highway, made sure the rest of the team knew what was happening and then headed back home.”

With having the car back in the shop for a week between the postponement and the make-up date, the driver; along with his father and his grandfather had to make sure they didn’t over-engineer their ride for the championship charge. The #14 team already had a pair of Flamboro Speedway starts and pre-season test session as the basis for their raceday set-up, so other than going through their checklist a couple of times, they basically left the car alone.

Knowing that his 17-point lead was anything but an insurmountable advantage, Brandt Graham had the knowledge that he’d need to run a smart race when the tour returned to the venerable Hamilton, Ontario area raceway for the season’s last dance Saturday, September 24th. Graham time-trialed in 5th spot and would take the green on the outside of the front row after the pre-race ‘Fast 5’ redraw.

“We may have been the favourite to take the championship, but it was hardly a walk in the park,” admitted the 18 year-old, who recently began post secondary studies in the Trades Fundamentals Program at Durham College, in Oshawa. “I had a realistic shot at winning the title, but the other drivers in the field were also looking to improve their overall finishing position in the final standings. A lot can happen in a 100 lap race and we had to hope for the best.”

At the checkered flag, the team’s equipment may have shown more battle scars than they might have liked, but Brandt Graham still logged a 3rd place finish and the spot on the podium was enough to clinch the title for the sophomore standout, becoming the youngest champion in the history of the Lucas Oil Sportsman Cup Series. The final margin between Graham and the second place point finisher was 22 markers.

“It was a great season and I almost can’t believe how successful we were,” said Graham after claiming the title. “Our team worked so hard throughout the year and I really appreciate the support my family, friends and fans. It’ll take a while for things to sink-in, but this is an experience I’ll savour for many years to come. It’ll be nice to relax for a while and then start thinking about next year.”