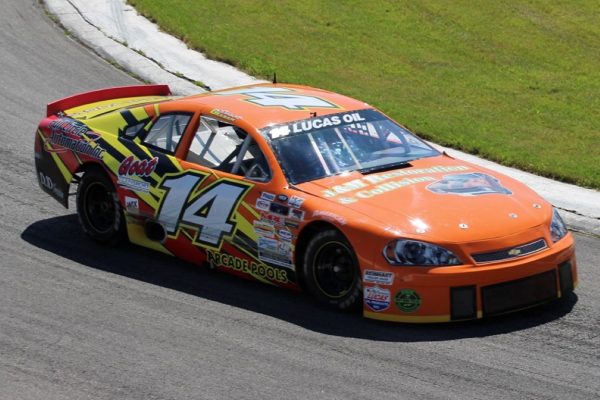 Just a week after sweeping both portions of twin 50 lap features at Flamboro Speedway for his first wins of the 2017 Lucas Oil Sportsman Cup Series season, Brandt Graham and the Graham Racing team returned to action Saturday, July 8th at Sauble Speedway. Getting back to the venue where he captured the ‘Boss of the Beach’ bonus for scoring back-to-back main event wins on the way to his 2016 championship, the #14 crew was looking for another solid effort.

Things started off on a high note, as the team took the pole position in time trials and selected the 5th place starting position in the ‘Fast 5’ redraw. From the drop of the green flag, the 19 year-old, second-generation speedster from Orono, Ontario settled into a rhythm, before starting to make his march through the field. Graham was picking-off cars one at a time and when he got to the runner-up spot, the caution flag flew. Using the outside line on the restart, the youngster dropped-back a few spots and then mounted a new run for the lead. With about 25 laps on the scoreboard, he took control of the field with a nice pass on the leader; just as another yellow flag waved.

“The cautions are a part of the sport,” the driver said. “Sometimes they can help your race, while other times they’ll hurt you. It seemed like every time we started to catch a break, we had to regroup. My Dad did a good job on the radio to keep me calm and we just took things as they happened. There really wasn’t anything else to do.”

Graham battled hard, but it seemed like every time he’d almost complete the pass, there would be another yellow. With a couple of laps left to go and an exciting finish to come, the #14 and another car got together. Brandt restarted 5th and after a green-white-checkered restart, made it back to 3rd. The second-place finisher beat him to the line by just a couple of inches.

“It would be great to win every race, but being in a position to win is just as important,” Brandt Graham said. “The team always gives me a great car and no matter what, we’ll always do our best to represent our sponsors, fans and friends at every show. We’re leading the points, heading into the next race – Saturday, August 12th – at Peterborough Speedway. We have a lot of experience there and it’s the closest event to ‘home’ on the schedule, so I’m looking forward to a great run.”