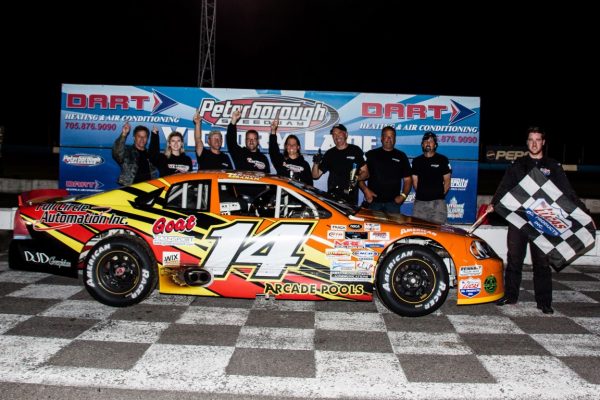 Considering the level of success he has attained since becoming a regular on the Lucas Oil Sportsman Cup Series schedule, it might be quicker to list the things Brandt Graham hasn’t done, than the things he has. Saturday, August 12th, the 19 year-old from Orono, Ontario – who is the reigning series champion – set a new track record during qualifying at Peterborough Speedway, with a lap of 14.50 seconds; eclipsing a mark that had stood since August of 2015. And that was just for starters.

In the fast-time re-draw, the second-generation speedster was matched-up with a young fan whose ballcap selection allowed him to keep the inside front row starting spot that he’d earned earlier in the night. From the drop of the green flag, the #14 machine was on rails, allowing Graham to build-up an advantage of nearly 8 or 9 car lengths on the second-place runner and begin working through cars at the back of the field when the first caution flag waved with 16 laps complete.

“Even though there had been bit of rain before we got on the track for our first practice session, the car felt great,” said the recent graduate of Durham College. “We went through some of our notes from last year and jotted-down a few ideas of things we could change, but stayed on course with the car almost exactly as it had rolled off the trailer.”

On the restart, Brandt Graham was once again in control of the field. He ran consistent speeds and hit his marks lap-after-lap. Just as he was about to lap the 3rd place car in the running order on the 70th circuit, another yellow flag slowed the field. With caution laps being counted as green during the later stages, the team set-up their driver for the final shootout.

“Its nice to have a calming voice in my ear, but there wasn’t too much to say,” Graham said. “They told me that the #4 car looked to be getting stronger, but to just keep doing what I’d been doing and everything should work out.”

Everything did work out for Brandt Graham, who claimed his second main event win of the year, leading all 100 laps in a wire-to-wire finish. After waiting more than a month since his last start, the team will return to action Saturday, August 19th when the Lucas Oil Sportsman Cup Series heads back to Flamboro Speedway for The Basement Store 100.