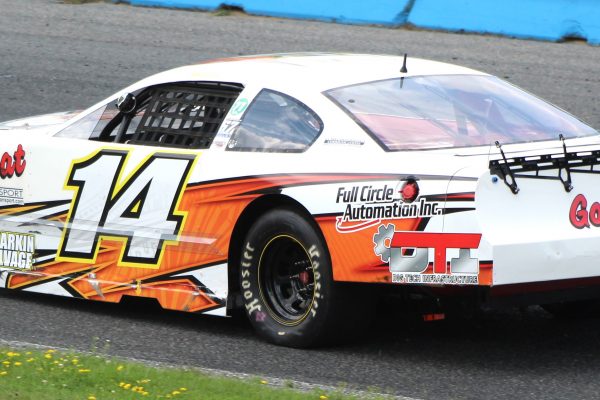 Most of his racing travels during the 2022 season have involved hours of travel and occasional border crossings. Its easy to understand why Brandt Graham would be excited about visiting a track that is about 30 minutes from his front door.

Saturday, August 20th the team packed the No. 14 pavement Late Model into the hauler and headed for Peterborough Speedway. Taking the start from inside the 4th row for the 25 lap feature event, Graham was 5th at the checkered flag. The driver says it was a good to get back ‘home’, see some familiar faces and talk to some old friends.

“We had a night off from our dirt racing schedule and no one had any work commitments. It just made sense to come here and have some fun,” Brandt Graham said. “Our family has a rich history at Peterborough. Dad won track championships here and I had a couple of victories during my Sportsman Series title runs.”

Graham Racing Peterborough Speedway notebook: Prior to the night’s 25 lap feature, Brandt Graham ran a pair of qualifying events. In the first of his preliminary rounds, he started 5th and finished 2nd. He started 3rd and took the win in the 2nd outing to lock-up his starting spot in the ‘A’ main…Graham Racing plans a return to Canada’s Toughest 3rd Mile Oval during Thanksgiving Weekend for the 29th running of the Autumn Colours Classic.

With the team’s asphalt return under their belts, its time to switch the focus back to the dirt Late Model season ending shows for the No. 98 and No. 14 teams. The next dates for the father and son duo from Orono, Ontario are coming-up Friday, September 9th at Brockville Ontario Speedway and Saturday, September 10th at Land of Legends Speedway, at Canandaigua, New York. The team will take a break before heading to Genesee Speedway for a pair of events Friday and Saturday, September 23rd and 24th.

Be sure to keep in touch with Graham Racing through the year’s late season events by visiting www.graham98racing.com or through the team’s Facebook, Twitter and Instagram social media platforms.