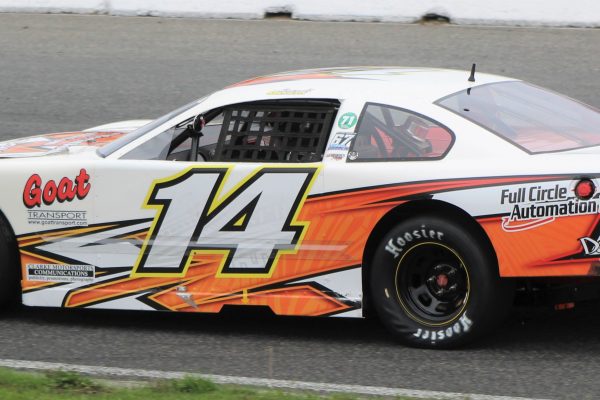 Brandt Graham’s motorsports career has been filled with many memorable moments. The second-generation racer from Orono, Ontario made history while running with the Ontario Sportsman Series for being the youngest main event winner on the tour. He also set the same mark for earning his back-to-back championship seasons in 2016 and 2017.

The 2021 edition of Peterborough Speedway’s Autumn Colours Classic saw Graham take another step in his racing career, as he made his first career start in the Electric City 167 Late Model event at the event billed as the Super Bowl of Stock Car Racing. With a supportive family and strong team behind him, he was ready for the challenge.

“I had some good runs there with the Mini Stock and in the Sportsman Cup Series car, but this was the first time with the Late Model,” Brandt Graham explained. “To qualify 8th in a field of close to 20 cars was a real shot in the arm. The car felt good after practice and the team and I were confident that we’d have a well-balanced, long run car.”

From the drop of the green flag and the ensuing false starts, the race had a very aggressive feel. The Graham Racing No. 14 ride felt comfortable right off the bat and Brandt had moved into 5th spot with only 4 laps on the scoreboard. With a rash of yellow flags during the first half of the race, he did what he could to find a rhythm but it seemed like just as soon as things got rolling, they were slowing down again.

“It didn’t make sense to push the car outside of our comfort zone too soon,” said Brandt Graham. “I wanted to stay on the lead lap and keep things in one piece until the halfway mark and then see if we could gain a few spots during the late stages. A 167 lap event is a long time on the track and in the car. Dealing with a ride that was bent-up and hard to handle wouldn’t have done us any favours.”

As the field rolled onto the infield pit lane for the mid-race break, Brandt Graham was sitting 9th. Under event rules, there was only so much teams could do during the timed stop so they worked through their checklist and waited for the call that sent cars back to the track. From the restart, it was a different race. Cautions weren’t as plentiful and after having Dan McHattie in control of things throughout the first half, Ryan Kimball took the lead with 96 laps complete. Even though he was challenged and briefly lost the top spot to J.R. Fitzpatrick, Kimball took the win over Connor James and Danny Benedict. Graham was 6th at the checkered flag.

“The car was great and I had a lot of fun out there. Coming out of that race with a finish just outside of the top 5; especially this year is amazing.”

The team thanks their sponsorship partners Arcade Pools, Full Circle Automation, J & M Restoration, Goat Transport and Beavis Excavating, with special thanks to Mayhew Graphics and Clarke Motorsports Communications for their support during the 2021 season.

Family, friends and fans can stay in touch with the team’s progress behind the scenes and at the track by visiting www.graham98racing.com or following Craig and Brandt Graham through the Graham Racing Facebook, Twitter and Instagram social media platforms.

Despite it being just his first Late Model start at the race, Brandt Graham (No. 14) scored a 6th place finish in the Autumn Colours Classic Electric City 167 – Sunday, October 10th – at Peterborough Speedway.