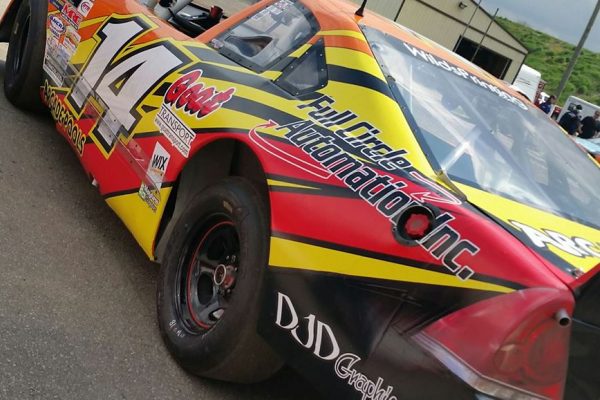 Weather has been the major story on the provincial short track racing scene this spring, with rain cancelling shows at several different venues. Saturday, May 13th, the Lucas Oil Sportsman Cup Series headed to Flamboro Speedway to kick-off the 2017 schedule and while there was a brief delay due to some input from Mother Nature, the 100-lap affair gave fans of the venerable oval near Hamilton, Ontario something to cheer about.

Having celebrated his 19th birthday the day before the opening round, the second-generation speedster from Orono, Ontario – who captured the series championship in 2016 – was looking to continue the party with a trip to victory lane. After setting the night’s 3rd fastest time during qualifying, Graham turned-in a strong performance and started the new schedule with a runner-up finish.

“We’d tested at the track a few weeks ago and that gave us some solid set-up notes,” the young driver said. “The rain delay threw us a bit of a curve, but it affected everyone the same way. I’ve never been a root and gouge kind of racer, so while I would’ve loved to get the win, being able to load the car into the trailer at the end of the night without the prospect of heading home with a damaged ride was a great way to get the year rolling.”

The fans at Flamboro saw a great show, as Brandt Graham – who had what most considered to be the best car in the field – ran more than half the main event’s distance locked in a nose-to-tail battle with the #77 machine of Alvin McNicol and while the race outcome could’ve ended-up with the a much different outcome with just a tap of a bumper, the pair raced each other hard; but clean at every turn.

Coming-up Saturday, May 20th Craig Graham will get a chance to return to action with the Pro Late Model division at Brighton Speedway. After spending his entire career on asphalt race tracks, the 44 year-old got his feet wet at the Saturday, April 29th season opener and recorded a 13th  place finish in his dirt track racing debut.

“It’s a new experience and I still have a lot to learn, but its also some of the most fun I’ve ever had in a race car,” Craig Graham admitted. “On pavement, you need to be smooth and in control. With the dirt car, you’re breaking the rear-end loose, running on the edge and turning the wheel to the right to get it to take the quick way through a left-hand corner.”