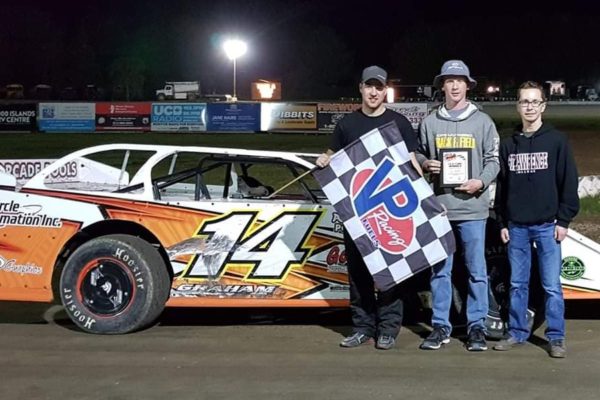 Graham started from the pole in the 30 lap main event. The 21-year-old second generation speedster from Orono, Ontario was able to lead a bunch of laps front the get-go as he steered his potent #14 open wheeled machine to the checkered flag. Making the most of the less than perfect spring track conditions that made it difficult to hold a consistent line, the talented sophomore managed to hold-off a talent-laden field on his way to victory lane. After the win, it was announced that Brandt will be the track’s Driver of the Week for Saturday, June 8th and have his car displayed near the general admission gate for fans to see and meet the driver.

“I lost the lead a few times during restarts but managed to regain the position once we were back under green,” Brandt Graham explained. “The car worked really well all night. It was probably the best it has ever been during my brief time on dirt. We had everything right where it needed to be to feel comfortable and find our rhythm.”

The Saturday, June 1st show at Brighton Speedway was part of the Triple Crown series for both the Canadian Modified and Late Model divisions, with the latter class also running for NLMA Series points. Craig Graham recorded a 10th place effort in his own headline main event and was thrilled to share in the moment of his son’s inaugural trip to the dirt track winner’s circle.

“Brandt was driving the car, but everything we do is a total team effort,” said Craig Graham. “With 2 cars to prepare and maintain for action every week, our crew of Marten Rottine, Ted Stacey, Rick Rowe and Ian Graham does an amazing job and gives us some of the best equipment in the Brighton Speedway pit area. That gives us both the confidence we need to be in contention from the drop of the green flag, whenever and wherever we race.”

Family, friends and fans can keep up with Graham Racing by liking the team Facebook page: Graham Racing or following it on Twitter: @Graham_Racing. On-line, look for www.graham98racing.com.