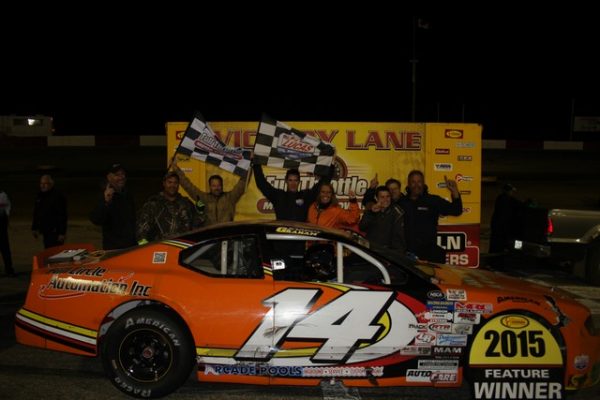 The night started with qualifying for the feature race and Doug Cathcart (#48) of Ottawa, kicked things off with a lap of 13.513 seconds, as the quick time led to anticipation that the track record of 13.217, set by Wood in July, could fall during the session. The next driver to turn a fast lap was Chad McGlynn (#18) of Kitchener, stopped the clock at 13.342 seconds. Tim ‘The Intimidator’ Tolton (#3) of Guelph was up next and went a little quicker at 13.282 seconds to move to P1.

That time would hold up through the next handful of drivers, until Wood hit the track and ripped off a lap in 13.132 seconds to trim almost a tenth of a second off the benchmark. Didero was up next and posted a 13.307 second lap, while Shawn McGlynn (#81) of Kitchener was also able to park his car inside the ‘Lucas Oil Fast Five’, at 13.356 seconds. Tolton was second, with Didero third, and Chad and Shawn McGlynn slotted in fourth and fifth.

The ‘Lucas Oil Fast Five’ drivers were paired with five youngsters on the front stretch before the green flag dropped, and after drawing for starting positions Chad McGlynn was on the pole, with Didero alongside him, Tolton and Shawn McGlynn were in row two, with Wood and sixth-place qualifier Graham in row three.

Didero took the lead on the opening green, but a couple of early yellows would slow the field before Shawn McGlynn took his turn up front on a lap four restart. The lead would be short lived as a lap six restart saw the point leader, Didero, scoot back to the head of the pack, with Wood in third, and Mike ‘Hollywaz’ Hryniuk (#15) of Windsor, and McNichol rounding out the top-five.

The early portion of the race was slowed by a number of yellows, and on a restart following the seventh caution flag on lap 25, Shawn McGlynn was able to get past Didero and take the lead again on what would be the longest run of the night. The field started putting down laps, with Didero running second, but he couldn’t stay with McGlynn and started to lose ground as Wood pressured him. Hryniuk had ignition problems, knocking him out, while Graham climbed to fourth spot, and seemed to be in a car that was looking stronger as the race was moving along.

McGlynn would make an error out front as he spun, and would be forced to go to the back of the pack, giving the lead back to Didero, while just after lap 75 Wood was spun in heavy traffic after a restart, hampering his championship hopes, and putting him at the back of the pack. On the final green flag run of the night, Graham started alongside Didero, with the 17-year old freshman searching for his first career win. Didero got the jump on the rookie, but as the laps waned Graham went on the assault. With just under 10 to go he made one attempt off turn four, but couldn’t find enough traction and tucked back in line. A few laps later he tried it again, and this time his Dodge stuck. He powered by Didero and took the lead on lap 95, holding on for his first career victory, and locking up the Rookie-of-the-Year title.

Graham spoke about picking up not just his first Lucas Oil Sportsman Cup win, but the first stock car win of his young career, “We were good tonight right off the trailer, and the last few races out car has really come in before the halfway mark. Tonight about lap 25 I knew we were where we needed to be to have a shot at it, and I started picking them off. We stayed out of the stuff that caused all the yellows, and with 20 to go I was working the #66 [Wood] to see where I could get him, and then on the restart he was taken out, and it put us on the outside of Didero for the restart. I got in behind him, and then tried him once, but I got a little loose. When I was under him the next time I just gave it, and did all I could to get past him. It has sort of sunk in, but not totally. At the start of the year our goal was just to finish all the races, and try to win the Rookie-of-the-Year. This is just icing on the cake.”

McNichol was one of the first drivers over to congratulate Graham, and Brandt added, “It was great to race against Alvin for the Rookie-of-the-Year title. We were together quite a bit on the track, and it was a blast to compete with him. We learned so much this year running in the series, with all the veterans like the McGlynns, and Josh Wood. As well as racing with Brennan for the win. It was an awesome way to end our season.”

With the runner-up finish, Didero was able to capture his first career championship, during a season in which he won three races in a row during the middle of the campaign, and finished with a 13 point lead in the title chase. ‘Mr. Highside’, spoke about his 2015 season, “I’ve never won a championship before, and have never won a race before this season. I’ve been at it six years now, and this year was a highlight all season. I won my first race, and my first championship. We also qualified real well almost every night, and won three races in a row – just one season-long highlight. I’m also so proud we won the championship for my dad as well. He has been in this racing deal for 45 years now, and has never won a championship. This is pretty cool. We were trying to do everything we could to win tonight too, but the #14 [Graham] got me clean at the end. Our car started to go away at the end. I think it might have been all the heat cycles on the tires, but at the end of the day I had to think about the big picture, and I knew where I had to finish compared to Josh. It was awesome to race against Josh right to the end for the championship. It was unfortunate that he got wrecked, or it might have come down to him and I for the win, and the championship at the same time.”

Two-time defending champion Shawn McGlynn spoke about his bronze medal performance in both the Lucas Oil 100, as well as the title race, “We had to come from the back tonight, and it made it interesting. I was doing everything I could go not hit Josh, but he was in the outside lane all the way down the backstretch, and the next thing I know he broke early and dove in front of me. I was on the brakes, but just couldn’t get stopped in time. We’re still happy with third tonight and on the season. I was racing in the Ontario Late Model Series as well, and we didn’t spend as much time this year as we did before on this car. We didn’t test at all this year, but it wasn’t just that, between Didero, Woods, McNichol, Graham, Connelly, and even my brother Chad, everyone really stepped their game up this year. We haven’t had as many competitive cars as we had in 2015 in years. We don’t have more cars, but we have better cars. We had two DNF’s, and that killed us. One while I was driving and one where Ken Grubb was filling in for me. We still had a win, two seconds, and a couple of thirds in the other five races, we just needed to finish those two races.”

Chad McGlynn finished fourth, while Wood was able to fight back for a fifth-place finish.

Release and Photos by Jamie and Jordan Maudsley and www.maudsleymotorsports.com.