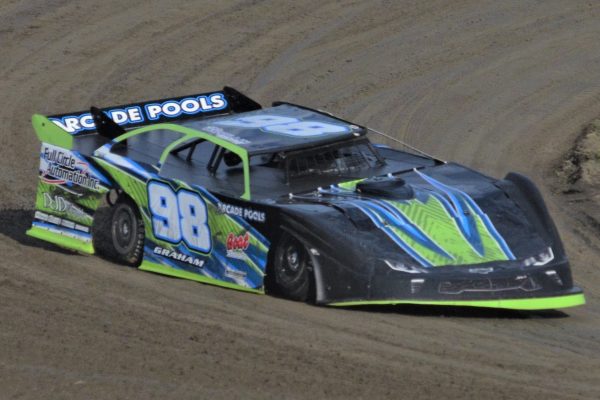 In many ways, it seems like the local racing season only started a couple of weeks ago; but in reality, things for the 2019 season will come to an end sooner than most teams and drivers would care to admit. Even with the schedule winding-down, Craig Graham and his crew are still working hard to make sure their #98 Late Model is ready for the last dates on the calendar. The father of 2 from Orono, Ontario – who’ll celebrate his 47th birthday on September 18th – says that racing at this time of year is a bit of a double-edged sword.

“The local point chase at Brighton wrapped-up a couple of weeks ago and despite not running the full season, we finished 11th in the final standings, in a group of 21 teams,” Graham said. “Now we’re running some of the Northeast Late Model Alliance events and that travelling series has its own championship fight. There is still a chance to gain some ground in that battle, so we’re putting our eggs in that basket to close-out the season.”

Craig Graham’s first order of business is a pair of shows – as part of the annual Applefest Shootout, September 20th and 21st – on the familiar home turf of Brighton Speedway. Friday night’s show on the local 3rd of a mile clay oval is a NLMA date, while Saturday’s Great Crate Race is an invitational for Crate Late Model teams. Graham says he’s hoping the home track experience will play in his favour.

“On their own, our Saturday night regulars are a pretty solid bunch of racers but when you’re putting the touring teams into the mix its guaranteed to be a strong starting field,” explained Craig Graham. “The first show of the weekend is 30 laps, with a 50 lapper Saturday, so we’ll need to find a set-up that will be able to help the car adjust to the changing track conditions.”

After the Brighton Speedway double-dip, the Graham Racing team will get a bit of break before it concludes the season with another NLMA start – Friday, October 4th, as part of the Outlaw 200 Weekend – on the high banks of Fulton Speedway, northwest of Syracuse, New York.

Graham Racing notebook: After having his Canadian Modified season come to an end as result of a late season crash, Brandt Graham – the 2016 and 2017 Lucas Oil Sportsman Cup Series champion – had been tentatively entertaining thoughts about returning to his asphalt racing roots with a start at Peterborough Speedway’s Autumn Colours Classic. With that show now less than month away, the team has announced that they won’t be trying to crack the Late Model starting line-up during the Thanksgiving Weekend event.

Keep up with Graham Racing by liking the team’s Facebook page: Graham Racing or following it on Twitter: @Graham_Racing. On-line, look for www.graham98racing.com.

Craig Graham (#98) powers through the turn during a recent NLMA start at Cornwall Motor Speedway. The team will wrap-up its 2019 season with a trio of tour dates starting Friday, September 20th at Brighton Speedway.

Error: An access token is required to request this resource.
Type: OAuthException
Solution: See here for how to solve this error