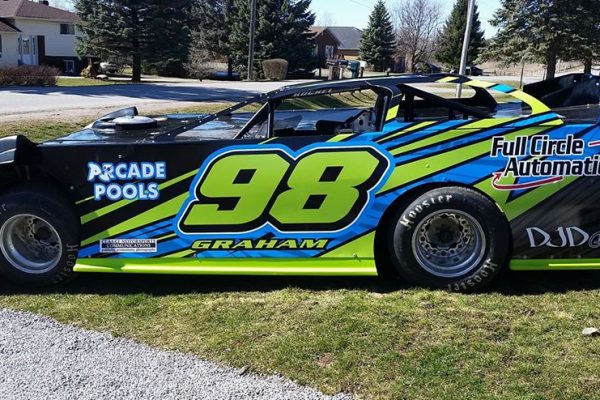 From his introduction to the world of weekly short-track motorsports competition, Craig Graham’s genre of choice has been the provincial pavement speedways. Earning Rookie of the Year, Best Appearing Car awards and Track Championships in the Thunder Car and Limited Late Model divisions at venues like Peterborough, Sauble Beach, Mosport and Kawartha Speedways, the immaculately prepared #98 machines have been a fixture on the black-top raceways. When the green flag waves to kick-off the 2017 campaign, things will change.

During the winter months, Craig Graham added a new piece to the team’s stable, with the acquisition of a race-ready, GM Crate engine powered Rocket Chassis dirt late model machine. The 44 year-old father of 2 – who punches the timeclock as a Fixed Vehicle Operations Manager at Clarington Hyundai – says he’s looking forward to hitting the track and discovering everything there is to learn about a new brand of racing.

“I’ve raced on some of the bigger tracks and bullrings across Ontario, but up until now, I’ve never run a lap on dirt. My entire career has been devoted to asphalt,” Graham said. “I always wanted to try running on clay and even though I won’t be able to commit to the entire season, I’m betting that the events we’ll get to run this year at Brighton Speedway will be a lot of fun.”

Racing on dirt won’t just be a new experience from the driver’s seat, but also for the entire team. The Orono, Ontario based operation – led by crew chief Marten Rottine – will unload for their first date Saturday, April 29th with an empty notebook that will quickly be filled with set-up information to help get the most from their new equipment.

When he’s not racing himself, Craig Graham will resume his role as father, mentor and coach as his son tackles another season of action on the Lucas Oil Sportsman Cup Series. After a memorable and impressive sophomore campaign – that included a 3-race wining streak and the $1000 ‘Boss of the Beach’ bonus for taking back-to-back victories at Sauble Speedway – Brandt Graham is counting the days until he’s back on the track and on the way to defending his 2016 Lucas Oil Sportsman Cup Series title. The Durham College student will be back at the controls of the potent #14 machine and chasing his next checkered flag.