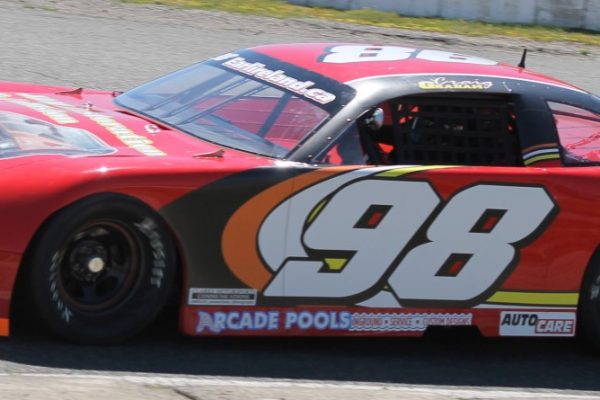 There has been no official mention of it. In fact, the only word beginning with the letter ‘R’ that is discussed around the family dinner table is ‘racing’.

Sunday, July 3rd Craig Graham climbed back into a racecar for the first time in nearly 2 years, with his sights set on a preferred Autumn Colours Classic starting spot at Peterborough Speedway’s Chase for the Colours Pole Qualifying event.

Since his 7th place Pro Late Model finish at the 2014 edition of the Super Bowl of Stock Car Racing, the 43 year-old from Orono, Ontario – who works as the Fixed Vehicle Operations Manager at Clarington Hyundai – has served as mentor, coach and raceday spotter for his son Brandt’s effort in the Lucas Oil Sportsman Cup Series. Even though he was turning his first laps in almost a couple of seasons, Graham says he quickly found his rhythm behind the wheel.

“Any rust I might have been feeling quickly went away after we made it to the race track for a few laps of practice,” said the driver, while relaxing with a cold drink after the 60 lap feature. “We needed to get a feel for how the car would perform on a track that would be baking in the bright sunlight all day. I’ve always liked the extra distance races that allow us to put together a set-up that will let the car continue to perform as the race wears on.”

The #98 machine worked well throughout the day, but with every driver on the tight, tricky layout fighting for the bottom groove, track position was at a premium. Graham would occasionally get as high as 2nd place in the running order, but lose the spots he’d gained when he was forced to restart on the outside after a caution flag. As the checkered flag waved, Craig Graham had logged a 6th place finish.

“It was a decent day, but when you have a strong crew effort by the crew and a good car, you’re always hoping for a better finish,” conceded Graham. “As our schedule permits, we might come back a couple of times again before the end of the year. Anything that’ll give us some additional notes to work from will help a ton come October.”

Brandt Graham will be in the running for the biggest payday of his young racing career when the Lucas Oil Sportsman Cup Series returns to Sauble Speedway Saturday, July 16th. He’ll need to start at the rear of the field for the 100 lap main event, but if he’s able to claim the checkered flag, the 18 year-old will head home with a $1,000 bonus and add the title of “Boss of the Beach” to his impressive resume.

Follow the team at every race by checking @Graham_Racing on Twitter and the Graham 98 Racing page at www.facebook.com. Look for www.graham98racing.com – an Image Factor web-site.

After a layoff of nearly 2 years Orono, Ontario’s Craig Graham came away from the Peterborough Speedway Chase for the Autumn Colours Classic event – Sunday, July 3rd – with a 6th place finish.