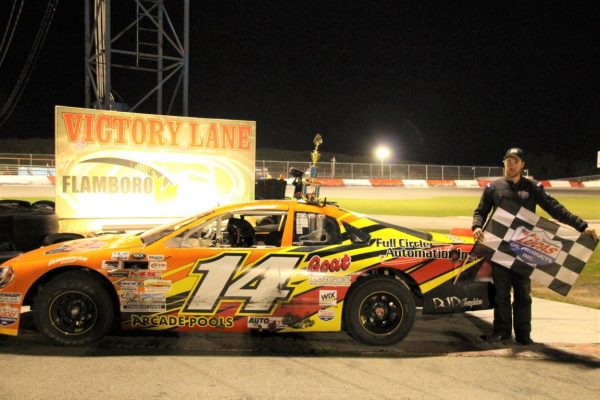 As home to 4 events on this year’s schedule, teams with the Lucas Oil Sportsman Cup Series will have a wide variety of options available to them where race day set-ups are concerned. After recording a second-place finish during the first tour stop – Saturday, May 13th and taking a pair of 50 lap features a month and a half later, no one could blame Brandt Graham for looking forward to his return to venerable Hamilton, Ontario raceway for a Saturday, August 19th event.

“Any time you see a lot of a particular track and have some success there, you enjoy going back there,” Brandt Graham said. “Our team makes some amazing notes everywhere we go, so I’m always confident that our equipment will be the best it can be whenever the green flag waves.”

The 19 year-old from Orono, Ontario is the reigning series champion and current point leader. Fresh from the most recent win on his resume, where he led all 100 laps at Peterborough Speedway, the second-generation speedster – who recently graduated from Durham College – time-trailed in the runner-up position during qualifying.

At the drop of the green flag, Graham started 3rd as result of the Fast 5 post qualifying re-draw. Originally scheduled to be run as a 100 lapper, the race distance was switched to a pair of 50 lap segments. Tour and track officials then made the decision to change things to a couple of 30 lap features after another competitor had an engine expire and clean-up was deemed to take too much time. The first session saw its checkered flag with the #14 car at the head of the field. For the second stanza, the top 5 opening round finishers were inverted for the next green flag of the night.

Coming from 5th place to start round 2, Brandt Graham began planning his strategy to get to the front of the field. Knowing there wasn’t much time to work with, he took at patiently aggressive approach in search of the win. Knowing that the team had given him a good piece, the driver quickly found his rhythm and swept both event segments for the second time this season.

“It was almost like a regular Saturday night main event,” Brandt Graham said. “The weekly division features at most tracks are 20 or 25 laps, so these ones were just a bit longer. Even as early as the practice sessions, the car felt great all night and it was good to be able to come away with another win.”