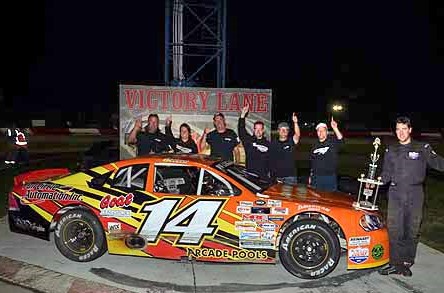 There is no mistaking the role weather has played in local short track racing this season. Nearly every venue in the province has felt the wrath of Mother Nature at one time or another. When the Lucas Oil Sportsman Cup Series signed-in at Flamboro Speedway – Saturday, July 1st – for the second event of this year’s schedule, the plan was to run a 100-lap main event. Rain changed that idea to a pair of 50 lappers, with points from each segment tabulated to determine the overall winner.

“You have to be ready for almost anything and this team has always been big on preparation,” Brandt Graham said. “When weather threw us a curve, we went through our notes and made some changes to the car so we’d be ready for the shorter distance events. Every time I climb through the window and fasten the belts, I’m confident in the piece the crew has given me.”

After finishing in the runner-up position at the season opener more than a month ago, 2016 series champion Brandt Graham was looking for another strong run at the controls of his potent #14 Chevrolet SS. The 19 year-old, second generation standout from Orono, Ontario appeared to be well on his way to achieving that goal, after time-trialing second out of the 15 starters.

With the traditional fast 5 redraw cancelled, Graham would take the green flag from second spot. Short track racing can be a lot about luck in addition to a well-prepared car. During the first segment, the young speedster needed to dodge a stray tire from a lapped car, then took the lead on the last lap for the win. For the second round, the top 5 spots were inverted. A pair of cars got together with a back-marker and knocked them both out of contention. Graham had a good battle with the #48 and held-on for the checkered flag to sweep the night’s action, adding another win to his impressive resume.

“The team worked hard all night and it was great to be able to take the victory in both segments,” admitted the driver after the event. “There isn’t much time until the next race on the schedule, but we’ll make sure the car is ready for action.”

Following the long break between the first 2 Flamboro Speedway events, the tour has a quick turn-around, with a Saturday, July 8th show scheduled for Sauble Speedway.