BRANDT GRAHAM IS READY TO BLAZE NEW RACING TRAILS FOR 2015 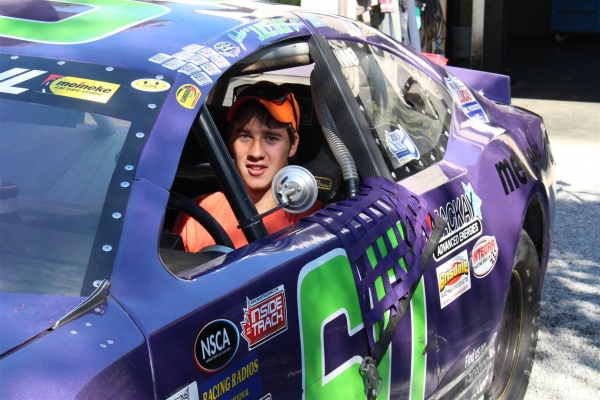 Orono, ON- (January 17, 2015)- Young people have the world figured out. They influence the latest trends, understand technology that completely confuses most adults and throw around terms like snap-chat, selfie, hash-tag and tumbler with ease in part of their everyday conversation.

When it comes to his racing career, Brandt Graham has proven that he’s not only a quick racer but also a fast learner. After three seasons at the controls of a Mini Stock at Peterborough and Kawartha Speedways, the talented teenager from Orono, Ontario will take his first green flag of the 2015 season behind the wheel of a Lucas Oil Sportsman Cup Series ride. The second generation speedster – who attends grade 11 at Clarke High School – says when the chance to move into a new division came along, he jumped at the opportunity.

“I wanted to move into a different class, but also continue to learn and develop as a racer,” said the youngster during a break at the team’s shop. “The Sportsman Cup Series has a schedule that will let me see some diverse tracks and compete in a bigger, heavier and faster car against some more experienced drivers. That can only serve to sharpen my skills and further my racing education.”

For his maiden voyage in the travelling series, Brandt Graham will strap-in behind the controls of a car that was campaigned in 2014 by Jake Ott. The ride is currently being prepped by the Graham Racing crew, in anticipation of the opening show of the seven event calendar – Saturday, May 9 – at Full Throttle Motor Speedway at Durham, Ontario.

One of the biggest adjustments on the horizon for Graham will be the races themselves. LOSC shows consist of on-track practice, timed qualifying and a 100 lap main event. That’s four times longer than any feature tilt he’s ever logged before. The 16 year-old runner says he’s counting down the days until his debut with a high level of nervous anticipation.

“Right now, there’s a lot the team doesn’t know but I’m confident that things will quickly fall into place,” said Graham. “The car is a proven piece and we’ve stripped-off the body panels and checked over the chassis since it arrived here about a month before Christmas. Our new marketing package will be ready shortly and we’ll announce some new sponsorship partners, paint scheme and the number we’ll be running in a month or so. Then, it’ll only be a matter of time ’til the first green flag of the season.”

With a bright future ahead of him and a lifetime of choices to consider, Brandt Graham is still contemplating his long-term career path. He’s taking each event as it comes along through the new campaign and looks forward to building the Graham Racing brand throughout the year.

Fans, family and friends can follow the team throughout the 2015 season by visiting www.facebook.com/Graham-98-Racing. For a copy of Brandt Graham’s 2015 marketing prospectus, contact graham.98@hotmail.com .