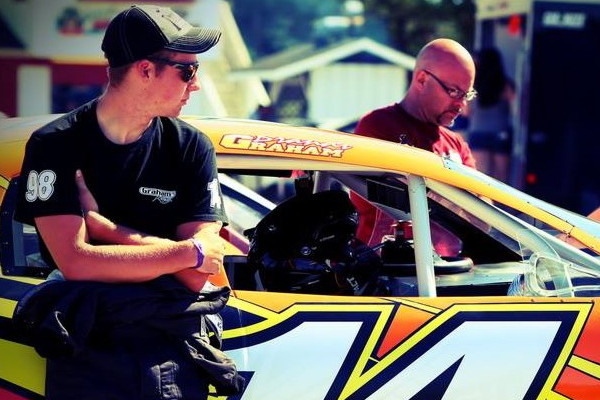 For the first few season of his stock car racing career, Brandt Graham was a regular in the Mini Stock division at Canada’s Toughest 3rd of a Mile Paved Oval. At the end of the 2014 campaign, the 18 year-old second generation speedster from Orono, Ontario announced plans that his team would make the transition to the Lucas Oil Sportsman Cup Series and the youngster has been making headlines ever since.

His 2015 freshman season was comprised of a streak of early top 10 finishes, but it wasn’t long before the driver of the #14 machine had scored his first podium-worthy effort – a second place – Saturday, August 8th at Peterborough Speedway. Brandt Graham says it was extremely rewarding to have such a strong performance on the familiar turf of the tight, tricky bullring on Mount Pleasant Road, west of the Liftlock City.

“The team worked hard to get the car ready for every race and that showed on the track,” said the driver. “Coming back to Peterborough again is something we’ve been looking forward to since this year’s schedule was announced. Having won the last 2 races – including the $1000 ‘Boss of the Beach’ bonus at Sauble certainly has on us on a roll and we feel like we’re capable of winning whenever and wherever we race. I can’t wait to hit the track again this weekend.”

With Brandt Graham taking his Sportsman Cup Series ride to Peterborough Speedway for the first time in about a year, his crew will spend some extra hours going over the set-up notes that led to the runner-up finish during his rookie campaign. The team will have an added bonus, with details of Craig Graham’s performance from the Chase for the Autumn Colours Classic event on July 3rd to augment their raceday information.

“When it comes to documentation, our crew is one of the best,” said Brandt Graham. “They keep track of everything. Dad and my grandfather are always writing things down. We have notations about temperature and weather conditions, spring rates, tire wear and anything else that can apply to how the car will handle. Even though we have a ton of information to work from, we usually start an event with a fresh page and then blend what we learn in practice with details we’ve brought to the track to help us find our ideal set-up.”

To promote the Saturday, August 6th Lucas Oil Sportsman Cup Series return to Peterborough Speedway, Brandt Graham will be profiled on ‘The CHEX Daily’ Wednesday, August 3rd. The segment will air in 4 installments. One during the noon hour news program and 3 more during ‘The CHEX Daily’ broadcast, between 5:00 and 6:00.

After winning the last 2 races on this year’s schedule, Brandt Graham is looking forward to the return of the Lucas Oil Sportsman Cup Series – Saturday, August 6th – at Peterborough Speedway.