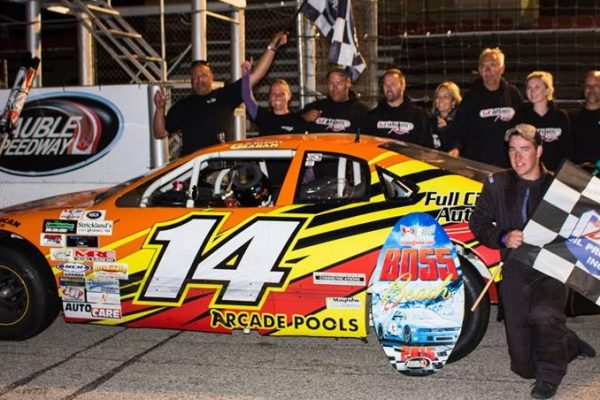 If there was even the slightest chance that he’s dreaming, Brandt Graham would willingly take a hammer and smash every alarm clock in the world to keep himself from waking up.

As the 2016 Lucas Oil Sportsman Cup Series schedule rolled to the starting line, the 18 year-old second generation speedster from Orono, Ontario – who will begin studies in the Trades Fundamentals Program at Durham College in September – had a newly revamped program to guide him through his sophomore season of action on the provincial Late Model stock car racing tour. Right out of the box, he logged 6th and 2nd place showings in the opening events at Flamboro Speedway and set-off to continue the charge that took him to the rookie of the year honours just a season before.

His second career series checkered flag Saturday, June 25th at Sauble Speedway put the likeable youngster in the running for some bonus cash, payable to the driver who could take both the opener and the follow-up show – Saturday, July 16th – date at the ‘The Beach’, provided they started at the tail-end of the grid. Even after he qualified 6th in time trials, Brandt Graham dutifully let the entire field roll past and took his position at the back of the pack for the start of the 100 lap headliner.

With strong support from his crew and expert guidance from his father, coach and mentor Craig Graham on the spotter’s stand, the talented wheel twister ran a well-paced event and worked his way through the pack and took the lead with the scoreboard showing 87 laps complete and never looked back to claim the win. It was not only his 3rd overall win, but Graham also pocketed the $1000 ‘Boss of the Beach’ bonus and takes the Lucas Oil Sportsman Cup Series point lead.

“Its been an amazing year so far; the type of season every racer looks forward to,” admitted Graham. “I’m so thankful for the opportunities I’ve been given and appreciate the support and loyalty of my family, friends and fans.”

With just a trio of events remaining on this year’s schedule, Brandt Graham says the show he’s looking forward to the most is the Saturday, August 6th date at Peterborough Speedway. It’s the track where he learned his craft in the venue’s Mini Stock division and the circuit that is closest to his home base of Orono.